skip to main | skip to sidebar

I want to tell you about my worst self. Actually, about the "worst self" of every New York City woman who likes expensive clothes.

Every year, in a warehouse in Chelsea, women drag giant plastic bags of designer clothes around on the floor, grabbing everything single things they can (one size up or down? NO PROBLEM), stripping down to their bras and underpants in a wall-less, unisex room, with a crazed look in their eyes. It is called the Barney's Warehouse Sale. Which essentially means free clothes. My shopping partner and dear friend tried to remind me that "these clothes aren't free, they are just really cheap" to which I simply snarled. No words, just a low growl that I had never heard come out of my mouth ever before.

This is how I came to stand in public wearing nothing but socks, wonder woman undies and a mismatch bra and scream at my dear friend Seth (who proved his loyalty and devotion by being there in the first place) to GET THOSE JEANS, NO THOSE JEANS. THE FIFTEEN DOLLAR ACNE ONES. And then lapse into silent rage.... get them now. Seth, the dear, tried to remind me that "these clothes aren't free, they are just really cheap" while I was digging through the knitwear--to which I simply snarled. No words, just a low growl that I had never heard come out of my mouth ever before.

It is the Where the Wild Things Are of shopping. It is Mardi Gras and Carnival and the Fourth of July, but crueler and without music and dance or barbeque. It is the kind of place where you walk out sweating and with your hair messed up and with five (!) pairs (!) of designer denim, two pairs of shoes and five shirts, only 250 USD poorer for it. Because, Emi, you were in the trenches. And in your secret heart, you know that if the real depression comes, you might have to sell apples, but youwill sell those apples in cute ass clothes.

And no one will ever know, as you strut to work in new Costume National heels, a Nanette Lepore cardigan and your new Acne jeans that securing them meant you no longer have any pride or shame. But you look so damn cute, you really don't care at all, not one damn bit. You'd do it again tomorrow if you weren't still recovering from it all. In fact, you really just want to holler your new mantra at anyone who might know the truth: 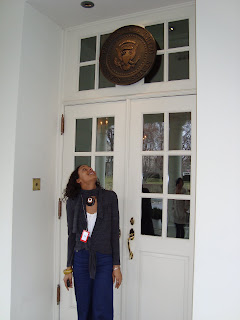 The above image proves two things:

(1.) I am alive! And still writing you letters!

(2.) I went on a tour of the West Wing last weekend. An unfortunate bad hair day during my visit prevents me from posting more photos. (That and there aren't too many as the secret service would likely have tackled me which sounded patently unfun.) (Plus the decision to wear high waisted denim, which may or may not be in fashion when I revisit this photos in old age.)

All is fair in the press room, though! 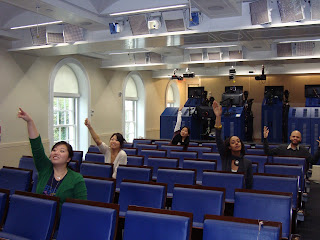 I am older now. Remind me why I cook dinner for so many people on my own birthday again, because I'd really prefer to be in bed watching reality TV and sipping coffee right now.

At this point in life, I pretty much consider myself a die-hard New Yorker. I live here, I love it here and while I am willing to believe that there may be a wild pack of horses that have the power to drag me out of this place, I hope to live within the boundaries of the five boroughs for the entirety of my life. Like most NYC transplants, I rep here shamelessly. And, for validation, I definitely hold onto the fact that my father was born in Queens, my grandmother in Brooklyn, my birth certificate definitively says New York City on it and for a time my family (with me in tow) lived at 12th and 4th. That said, I spent a solid 16 years of prime developmental time in New Jersey.

Turns out that no matter how hard one tries--When you are from New Jersey, December 26 is the day when you instantly shed all your adopted New York-ness with wild abandon, go back to New Jersey, to the mall specifically, and shop like you fucking mean it. Like a homing pigeon on a mission, you get in your car or on a bus and cross that bridge or tunnel because you have been CALLED HOME.

You enter the mall and your eyes pop... no sales tax! 60% off! mom's buying! You no longer give a holiday shit about cool, hip, trendy or handmade. You lick your plate clean at California Pizza Kitchen and actually remember to order the same things you used to order when you were 15. You delight in being given a purple plastic pager and told that your turn to nosh will come in 20-30 minutes. Lunch comes and it tastes like high school dates. You fight with your mother over BBQ chicken pizza and Arnold Palmer's like its 1995.

On December 27th, you will want boutiques and assymetrical clothing once more. On 12/27 you will return to free range and grass fed, surely. But one short day before that? You want chain stores, deep discounts, mass produced food and coupons. On December 26th, you are the most American ever. You heart parking lots and big cars and highways and all the new shopping opportunities being built on Route 3 or 4 (depending on which side of the family you are shopping with that day). You heart Cinnabon, not Magnolia. You are Fuck the Subway. You are Double Cheeseburger Please. You are Wait That's Only $35? I'll Take That Too Then. You are Yes I'll Take a Plastic Bag. You are Gap Old Navy Lord and Taylor Cheesecake Factory Nordstroms Modells Best Buy Brookstone. You are Can We Go To IKEA too?

For girls like me, the day after Christmas you become the infinite end consumer, as you might say. Whether one likes it or not.

PS. This was imported/slightly modified from a post on the other blog, as I thought you might like to read it even if it wasn't initially intended as a letter for you.
Posted by Lisa at 6:08 AM 1 comment:

Who doesn't love tacky christmas lights and fat plastic christmas santas lining the block. Perhaps you have to be from Jersey (or apparently my block in Brooklyn) to understand, but overboard Christmas houses never fail to make me happy. And the eggnog and the classic holiday movies and the giving presents and the getting presents. And the food! All good things.

The problem with Christmas is that it seems that people save up all the crazy they have inside of them and then for one day in December (two or three if you are lucky)--let it ALL HANG OUT. And people appear to be accruing interest on their crazy. Which means that its crazy x [enter going interest rate on savings accounts here]. Lisa does not like.

In these days of economic woes, I submit that people should be saving up their money, not their crazy, for Christmas. I think we would all have a lot more fun.

Although these letters are to you, they are also to everybody.

Readers who are not Emi-- go 'head and chime in!

I hate/detest/despise/loathe getting my hair done. 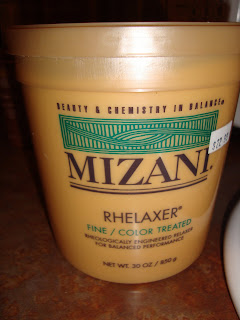 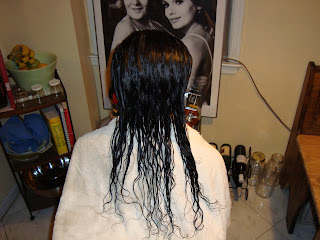 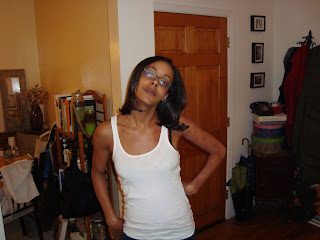 But now it is short and easy to love! And I didn't even have to leave my kitchen!